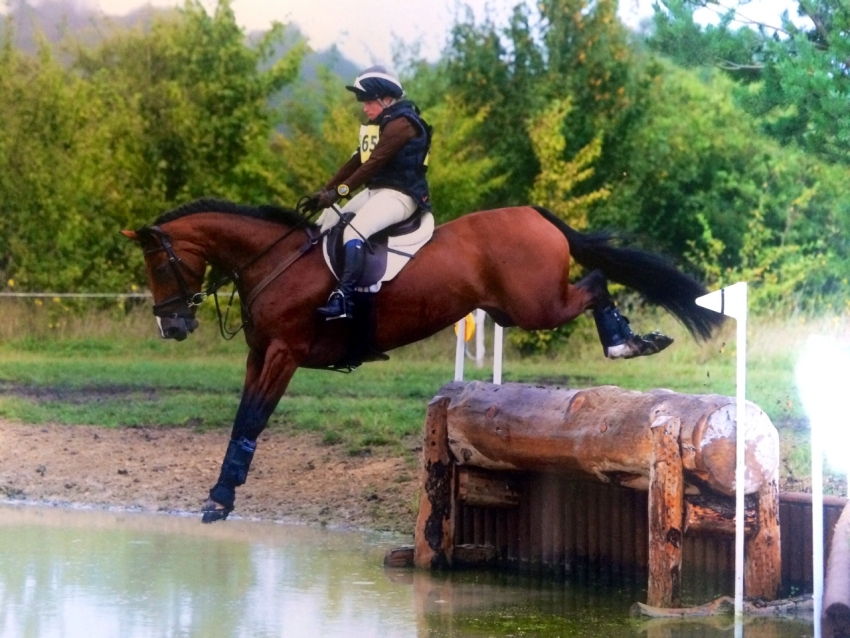 Once again my ambitious statement that ended my last blog was not achieved so sorry folks for the gap in blogging!

As you can imagine a lot has been happening at Team Pickles but the thing that has given me the most satisfaction this summer is that........wait for it folks….. yep we have not had  a member of staff leave for over 3 months now! Whoop whoop, so I am celebrating by giving my super lovely team some extra holiday for working their socks of this summer and for making my life a lot less stressful. Mary Burnfield, Kelly Smith, Hannah Okines, Alex Haynes, Claira Miesegaes and Sara Walker a huge thank you to you all – you are invaluable!

So on to the horses where we have a lot to catch up on. Direct Tullyoran Cruise belonging to Equestrian Direct has amongst other things had a name change - well done to those who spotted it, can tell who the stalkers are! We have had a great few runs finishing 5th at Keysoe over a tough Novice track, 5th at Sapey over another trappy course and then onto Gatcombe where she tried her little heart out in the CIC1* to finish outside the placing’s purely due to losing a shoe and having to take it steady. So holidays for her now before a winter of dressage and Sj training for her! Love this horse.

Mel Pritchard’s beautiful ex racer Winsome Wendy has clocked up three wins so far this season with some stunning dressage scores and is definitely contributing to my current fifth placing in the Foundation Points Table - next year I will be going for the win!

Sue Dawson's super Future Divine Illusion (Dennis) has had a good season and after jumping really beautifully at Solihull to finish 9th and Llanymynech to finish 14th he has gone back to his mummy for some hacking and time out to be a dressage pony before we make plans for next season. Dennis has a great sense of humour so let's hope he is behaving himself for his mummy!

Lucianna Wiser Than Wise (Beau) belonging to Lucy Keeney has also had a superb summer; we decided not to do any eventing as he is a big 4yo but to focus on the BYEH programme. So off to Field House we went and against over 50 four year olds Beau won the class by 10 marks toqualified us for Burghley. I have never been so was hugely excited to be going on such a classy looking horse. However, fate was to play its hand and Beau managed to throw a splint just before the big day meaning holiday time it was for him. Sad times but next year we will be there as a five year old! Thank you to Lucy for allowing me to ride her lovely horse all summer and exciting times ahead.

Fate played its hand again and whilst watching the BYEH FINAL with Kate Willis we saw a horse that we couldn't forget in the top ten line up and I am very excited to say that this horse, Cendora, is now safely part of Team Pickles and is owned by Kate Willis and Mel Pritchard and will be making her debut next season with me as a five year old.

The lovely Coco Chanel belonging to Hannah and Michael Henderson has matured well this summer and is out doing dressage and is turning into a bit of a pro. She has such lovely paces and a fabulous temperament so next season will be a fun one for her. Hannah and Mikey have a lovely horse who hopefully will bring some really good times next year.

Tim and Vanessa Willes beautiful TJ Blousey Brown (Bugsie) has had a flying summer with a win at Sapey, 4th at Shelford and 10th at Goring Heath in the BE100. She is such a classy scopey mare who with time is going to be a star. I am looking forward to a winter of flat work and jump training before going Novice next season.

We have another new addition in the form of Patsy who is out of the same mare as Direct Tullyoran Cruise so you can imagine this is really exciting; she is now broken in with thanks to Mary B and will start jumping in the next few weeks. She stands a little smaller than Tully but knowing all of her ridden history will be such an advantage and I really can't wait to jump her - let's hope she is half as good as her sister has turned out to be!

The Hathaway Horse brigade are also having an excellent summer with the star of the show being Tina Faulkners Whole Lotta Rosie who has now been 2nd four times this summer - are we going to finish with a win? We have two more events to try and make it happen so fingers crossed the upgrade will happen before we finish! All that being said, I don't think anyone could ask for more from this super special little pony.

The Beautiful Hathaway Quality (Roxy) finished her season at Homme House 4yo BE90 with 5th place in a strong class and 5th place but not good enough to qualify at the Carlton BYEH class. Her jumping has come on leaps and bounds as she strengthens up and given how blood she is I have a very good feeling about her future.

Hathaway Strider (Jimmy), the diminutive grey of our crew, has also had some great results this summer, finishing 6th in a BYEH qualifier at Carlton, followed by a 5th in a 5yo BE100 at Solihull and a win at Sapey. He is having his holidays now as we have a busy winter ahead doing some BD and BS in prep for a busy 2015.

Hathaway Wowfactor (Ruby) is on great form competing in her first BE event at BCA this week. A 27.5 dressage was good enough for third after this phase and a costly rail and some time penalties XC put us out the prizes but my goodness this horse has a future and I feel very lucky to ride her.

Hathaway No.1 (Fizz) has shown she has a real flare for dressage so is going to turn her attention to some BD very shortly and hopefully will bring home the ribbons in this sphere. We are all registered and ready to go. The patent bridles have arrived so hopefully we will fit in nicely!

I also have a new ride in the form of PLS Bluejay who is a super cute blue and white pony who is owned by Trisha Thornton. The aim for this man is to make him into Rosie pony mark 2 - I have some work to do then, no pressure!! However, he has started off well with a 5th place in the Unaffiliated at Aston Le Walls followed by 7th today at BCA with a lovely double clear in his first BE event.

So you can probably see why blog writing has taken a back seat? I can't complain though, I have to say I have some fantastic horses to ride, super owners to ride for and a great team to support me - what more could a girl want and to top it all off my students seem to be doing really rather well!

Mary B and Ballinfull Boy have bagged some top 10 placings and are looking really established at BE90 so will upgrade next season. Airtime seems to be hard to beat at BE100 with Aimelia Herbert and is loving his new life. I do miss him but seeing him so happy at this level is such a pleasure to be part of. Bruce and Claira Miesegaes are also flying with some serious placings at BE100 before Claira jets off to the Southern Hemisphere for the winter (lucky lady).

Hannah Okines and her lovely little horse we found in Ireland last year are getting Very established and had a 5th placing at Moreton Morrell unaffiliated last weekend. BE next year Hanny O is calling.....

Chloe Herbert and Arkwright NJ are back on the scene and again are dominating the BE100, my go tomorrow with the lovely Alfie at BCA, I did warn her that she might not get him back!!

Sister Suzie & Sarah Mann have been sharing Kate Low’s lovely Hazy Daiz this Summer and both have done really well with some top ten results.

Amy Newcombe and her talented little horse Condor Goariva have enjoyed their first season of BE posting some lovely jumping rounds. Amy won’t argue when I say her horse is not particularly keen on dressage but with patient and persistence on Amy’s part the marks are improving at each event.

Have I covered them all? Ah no! I am also having so much fun riding Kate Matterson's lovely young horses and am looking forwards to competing next year with her. All in all fun times are ahead but I really couldn't do it without my super team and sponsors and of course my super husband Mr P who as always puts up with me!

Until next time - god knows when!

View the embedded image gallery online at:
https://www.colinapickles.com/eventing-blog/56-a-whole-lotta-summer#sigProIdf3af21b598
More in this category: « Back on Form 2014 Eventing Stats »
back to top
Tweets by @ColinaPickles