Warning: count(): Parameter must be an array or an object that implements Countable in /home/rachaelb/colinapickles.com/components/com_k2/models/item.php on line 763

It's been a long time...sorry 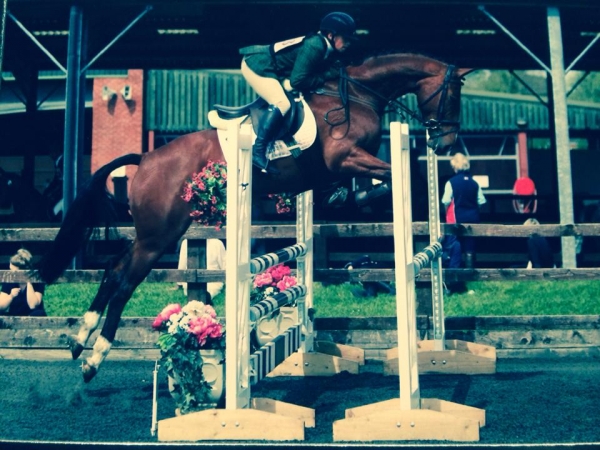 I always know that we are half way through the season when the grass is sky high, the list of jobs is two pages long and Mr Pickles is no where to be seen - you guessed it he is in Germany at his favourite event Luhmuhlen!

On his return he was presented with his list of duties which he is steadily working his way through and I was presented with a bottle of some ghastly German spirit which is apparently the best thing ever and a jar of rollmops; god he knows how to spoil me!

We have had some good outings with the horses and the star of the show is still Mr Percy pig aka Knights Escapade. He finished second in  his first BE100 at Shelford Manor and then third in the same class at Ascott under Wychwood. He is on great form albeit a small blip at Stonar (I will forgive him as he is still very green) and we are very much looking forwards to our next outing at Upton House which I understand David Evans and his Team have given a makeover. What is also exciting is that Red Horse Rug Clean, my fabulous sponsors, are sponsoring a section or two and their prizes are pretty special if you are lucky enough to be in one of their sections.

Tully (Tullyoran Field of Dreams) is also going from strength to strength and finished in the top ten in her last two outings. She is such a classy horse and one I am hugely excited about for the future - She is just my type, quick, nimble and sharp with heaps of talent.

Albert (Airtime) is very excited about his run coming up at Barbury (as am I). We haven't had the best of seasons for one reason or another so it will be great to get going and as usual I am aiming high and going for the win!!!!

I have a new ride this season in the form of  Ron (Goosesberry Hill Castle), he is a lovely Irish horse who belongs to a good friend of mine Jenny Webb. He is here to see if eventing is his thing so I am very excited about doing his first event at Stafford later this month.

Apple (Ciderpress) is back on form and we are off this morning for a spot of show jumping before she starts competing at Stafford. I am itching to get going with her as she really is such a special horse and is gaining in strength and fitness all of the time.

We have made the tough decision to retire Comet (Shannondale Comet) from eventing and focus on his dressage which he is so good at. We have had a lot of deliberation about it but feel he is not going to progress up the grades and therefore would be better doing a job that he is really good at and can excel. So we are off to Dressage this Friday for his debut this year. He has done quite a lot of affiliated in the past and was really good at it so hopefully we will have some fun times ahead.

Baby Dennis  (Future Divine Illusion) is starting what I call 'proper work' now and is doing his first dressage competition on Friday. I think he will be a little green but he is ready to start going out and about and seeing a few things. We are off xc schooling with him tomorrow and a few others so it feels like the next chapter has started for Dennis. Sue Dawson who owns him came for her first ride on him last week which was really nice to see.

Hannah and Michael Henderson have made a very exciting purchase in the form of Miss Coco Chanel who is a four year old by Vancouver and has just arrived from the Emerald Isle. We had a very fun trip shopping for her and ended up seeing some really nice horses as well as have a few hilarious moments along the way. In the end though, Coco Chanel was the clear winner, however, we did pickup a couple of nice projects also. A lovely horse for Hannah to ride and also one that we felt we couldn't leave without - you could say it was a successful trip. Coco will hopefully be attending a couple of BYEH classes this year if we can get her ready in time!

Tina and Ian of Red Horse Rug Clean & Central Clipper care fame, who sponsor Team Pickles have also some new arrivals in the form of Fizz who is a beautiful three year old who we are just starting to break in and then we have a lovely four year old in the form named Wow Factor (love the name) who again will be broken this year. We also have a couple of very cute yearlings so watch this space.

So as you can see we have a lot going on here at the yard and as Mary is back from her jolly hols it is just as well!

Our latest recruit Alex Haynes has joined the team so we are now firing on all cylinders which will give us the boost for the second half of the season.

It is with great sadness however, that our muck out superstar Matt has gone on to other employment. He will be missed here especially as he was such a life saver for us through the winter - good luck Matt!

Also, a big well done to the Warwickshire Pony Club open team who qualified for the Championships last weekend! All the team road super and well deserved there ticket to the champs!

So there you go some very interesting news and times ahead, off to Allenshill now for a spot of Sj practise.

Promise I won't leave it so long next time!


Warning: count(): Parameter must be an array or an object that implements Countable in /home/rachaelb/colinapickles.com/components/com_k2/templates/default/item.php on line 248

More in this category: « It's all about Albert Whole New Look »
back to top
Tweets by @ColinaPickles